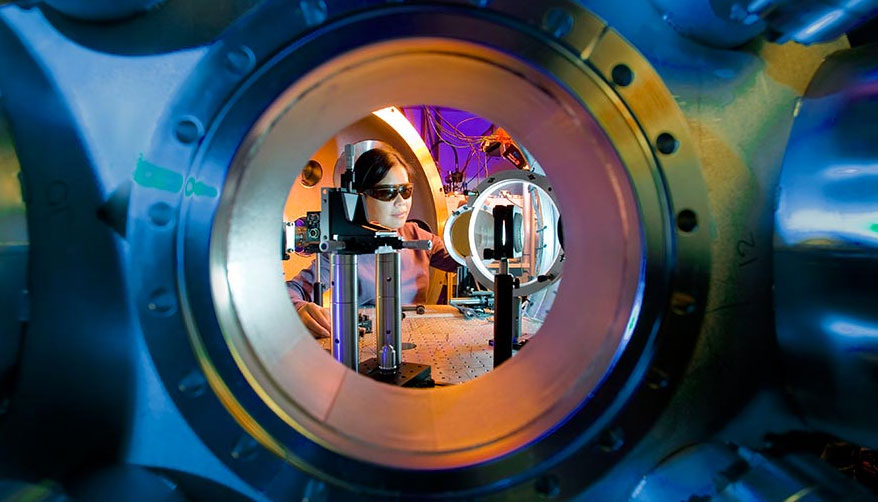 DOE’s Office of Fusion Energy Sciences (FES) within the Office of Science awarded the new research network, called LaserNetUS, $6.8 million over the next two years.

LaserNetUS includes the most powerful lasers in the United States, including lasers with powers approaching or exceeding a petawatt. LaserNetUS will provide U.S. scientists increased access to the unique high intensity laser facilities at nine institutions.

LLNL’s Jupiter Laser Facility (JLF), one of the facilities, is the only full-time intermediate-size user laser facility in the nation.

"The Jupiter Laser Facility continues its stated mission to provide world-class support to the broad community of high-energy density science researchers," said Bob Cauble, director of the JLF. "The facility is designed to provide a high degree of experimental flexibility and high laser shot rates, and to allow direct user operation of experiments."

High intensity lasers have a broad range of applications in basic research, manufacturing and medicine. They can be used to recreate some of the most extreme conditions in the universe, such as those in supernovae explosions and near black holes. They can generate high energy particles for high-energy physics research or intense X-ray pulses to probe matter as it evolves on ultrafast time scales. They also are promising in many technological areas such as generating intense neutron bursts, which could evaluate aging aircraft components, precisely cut materials or potentially deliver tightly focused radiation therapy to cancer tumors.

Petawatt lasers are lasers that generate light with at least a million billion watts of power, or nearly 100 times the output of all the world's power plants — but only in the briefest of bursts. Using the technology pioneered by two of the winners of this year's Nobel Prize in Physics, called chirped pulse amplification, these lasers fire off ultrafast bursts of light shorter than a tenth of a trillionth of a second.

The commissioning of the high-energy, short pulse Titan laser within LLNL’s JLF provides a unique platform for the use of petawatt-class lasers to explore laser-matter interactions under extreme conditions. JLF includes the short-pulse Titan laser, long-pulse Janus lasers and the COMET research laser as well as associated target chambers and diagnsotics.

The U.S. was the dominant innovator and user of high-intensity laser technology in the 1990s, but now Europe and Asia have taken the lead, according to a recent report from the National Academies of Sciences, Engineering and Medicine titled "Opportunities in Intense Ultrafast Lasers: Reaching for the Brightest Light."

Currently, 80 percent to 90 percent of the world's high-intensity ultrafast laser systems and all the highest power research lasers currently under construction or already built are overseas. The report's authors recommended establishing a national network of laser facilities to emulate successful efforts in Europe. LaserNet US was established for exactly that purpose.

LaserNetUS was established to help the U.S. regain its leading position in this important field. LaserNetUS will hold a nationwide call for proposals for access to the network's facilities. The proposals will be peer reviewed by an independent proposal review panel. This call will allow any researcher in the U.S. to get time on one of the high intensity lasers at the LaserNetUS host institutions.