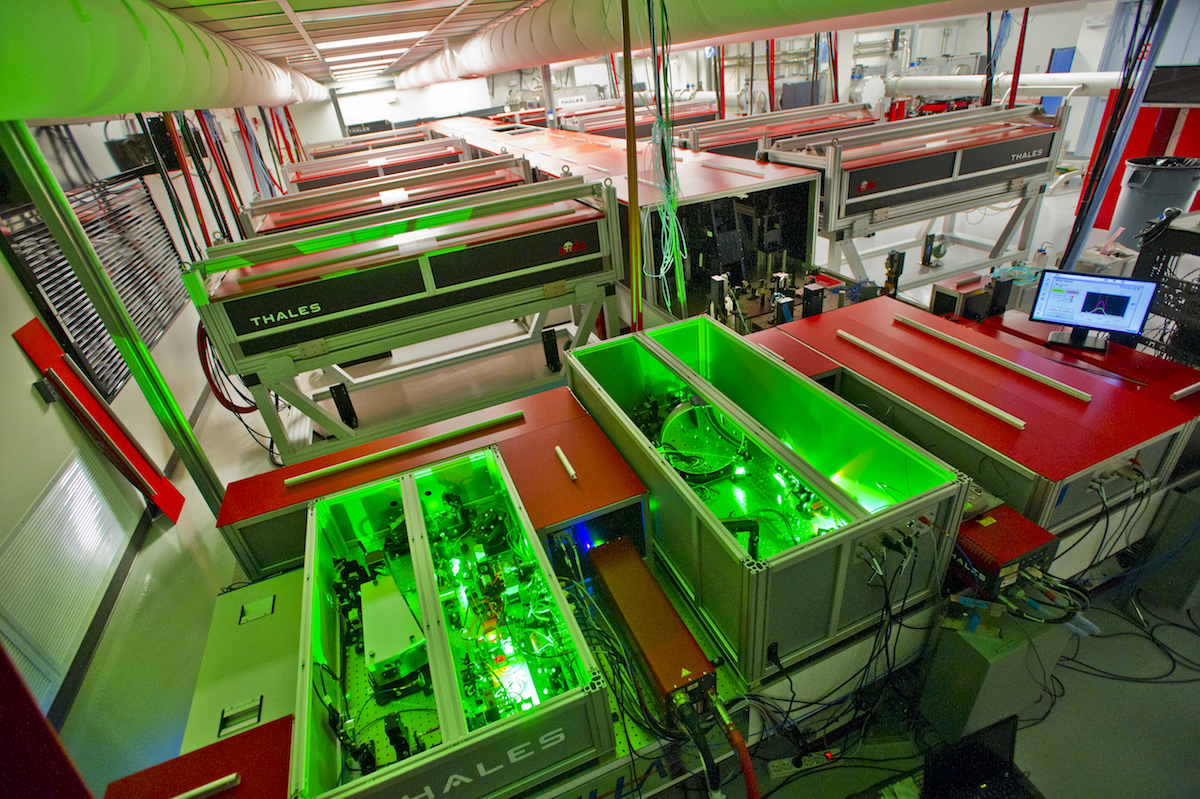 To help foster the broad applicability of high-intensity lasers, the Department of Energy’s Lawrence Berkeley­ National Laboratory (Berkeley Lab) is a partner in a new research network called LaserNetUS.

LaserNetUS includes the BELLA petawatt laser at Berkeley Lab’s Accelerator Technology and Applied Physics Division, as well as other leading high-power lasers in the U.S.

“High-intensity and ultrafast lasers have come to be essential tools in many of the sciences, and in engineering applications as well,” said James Symons, Berkeley Lab’s associate laboratory director for its Physical Sciences Area.

They have a broad range of uses in basic research, manufacturing, and medicine. For example, they can be used to recreate some of the most extreme conditions in the universe, such as those found in supernova explosions and near black holes. They can generate high-energy particles for high-energy physics research (being explored at the BELLA Center) or intense X-ray pulses to probe matter as it evolves on ultrafast timescales. Also, lasers and laser-based systems can cut materials precisely, generate intense neutron bursts to evaluate aging aircraft components, and potentially deliver tightly focused radiation therapy to tumors, among other uses.

The petawatt-class lasers of the LaserNetUS partners generate light with at least 1 million billion watts of power. A petawatt is nearly 100 times the output of all the world’s power plants, and yet these lasers achieve this threshold in the briefest of bursts. Using a technology called “chirped pulse amplification,” which was pioneered by two of the winners of this year’s Nobel Prize in physics, these lasers fire off bursts of light shorter than a tenth of a trillionth of a second.

The U.S. was the dominant innovator and user of high-intensity laser technology in the 1990s, but now Europe and Asia have taken the lead, according to a recent report from the National Academies of Sciences, Engineering, and Medicine titled “Opportunities in Intense Ultrafast Lasers: Reaching for the Brightest Light.” Currently, 80 to 90 percent of the world’s high-intensity ultrafast laser systems are overseas, and all of the highest-power research lasers that are currently in construction or have already been built are also overseas. The report’s authors recommended establishing a national network of laser facilities to emulate successful efforts in Europe. LaserNetUS was established for exactly that purpose.

LaserNetUS will hold a nationwide call for proposals for access to the network’s facilities. The proposals will be peer reviewed by an independent proposal review panel. This call will allow any researcher in the U.S. to get time on one of the high intensity lasers at the LaserNetUS host institutions.

Wim Leemans, director of Berkeley Lab’s Accelerator Technology and Applied Physics Division and of the BELLA Center, said, “This has the potential for huge leverage of existing and future investments in laser facilities. Researchers across the U.S. have great ideas for discovery science that depend on lasers, and LaserNetUS can connect them with beamtime at sources that meet their needs.”

The group held its first annual meeting at the University of Nebraska, home of the Extreme Light Lab, in August 2018, and will hold a nationwide call for user proposals to access the network’s facilities. The proposals will be peer-reviewed by an independent panel. This process will allow any researcher in the U.S. to request time on one of the high-intensity lasers at the LaserNetUS host institutions.

Lawrence Berkeley National Laboratory addresses the world’s most urgent scientific challenges by advancing sustainable energy, protecting human health, creating new materials, and revealing the origin and fate of the universe. Founded in 1931, Berkeley Lab’s scientific expertise has been recognized with 13 Nobel Prizes. The University of California manages Berkeley Lab for the U.S. Department of Energy’s Office of Science. For more, visit www.lbl.gov.

DOE’s Office of Science is the single largest supporter of basic research in the physical sciences in the United States, and is working to address some of the most pressing challenges of our time. For more information, please visit the Office of Science website at http://science.energy.gov.